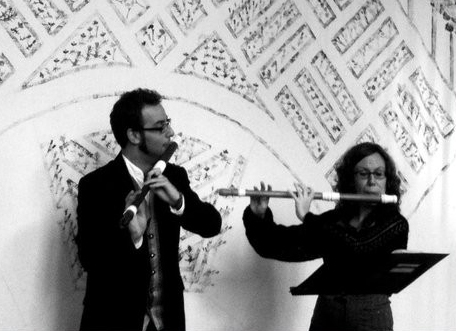 “Lights and shadows, dances and fantasies, the song of the goldfinch and the most desolated weeping”. These are the elements that can be found in the music that Les Goûts-réunis would like to present. Two baroque flutes. It is not necessary a big orchestra or complicated ensembles in order to move the audience´s deepest feelings. As one of the most popular instruments in Europe during the 18th century, almost every composer wrote beautiful music for the flute. The result? A musical experience as colorful and rich in sound as rarely presented on stage. Let´s make a trip to the past. Let´s imagine that we are in the middle of a musical evening placed in a lovely hall. Let´s enjoy the little stories told by these pieces.

Thanks to the motivation of our teachers (Wilbert Hazelzet & Kate Clark) we found this duo in 2008 while following our studies at the Koninklijk Conservatorium in Den Haag. The main aim of our ensemble is the research of the repertoire for two flutes. This repertoire is mainly french, (Hotteterre, Philidor, de la Barre...) but it also includes pieces by G. Ph. Telemann, P. Locatelli, and even the great W.A. Mozart. We have brought this music to Spain (Festival de Música y Danza ciudad de Linares) as well as to the Netherlands (Den Haag and the Utrecht´s Early Music Festival 2010).

Laura Palomar Salvador was born in Valencia (Spain), where she completed a Bachelor degree on modern flute. After this, she studied in Karlsruhe (Germany) with Renate Greiss-Armin (principal flutist of the Philharmonischen Staatsorchester Hamburg), obtaining a Master Degree, and in The Hague with Kersten McCall (principal flutist of the Royal Concertgebouw Orchestra). Between 2006 and 2008 she was member of the National Youth Orchestra of Spain, and she colaborated with the Orchestra of Cordoba and Orchestra "Filarmonía" (Madrid). Laura’s interest for baroque music was awoken at an early age, and she took for many years several traverso courses with Wilbert Hazelzet, Kate Clark, Jed Wentz and Frank Theuns. During her studies in Karlsruhe she also took traverso lessons with Heike Nicodemus and founded the Korante Musica ensemble. Currently she studies traverso with Kate Clark at the Royal Conservatoire in The Hague.

Alberto Trujillo Teruel is born in Linares (Andalucía, Spain), he studied modern flute at the Professional Conservatory of Linares and at the Royal Conservatory of Granada with Javier Castiblanque. He took flute courses and masterclasses with Juan Ronda, Will Offerman and, especially in the field of contemporary music, with Salvador Espasa. His musical activity began at an early age in the orchestra "Ciudad de Linares" and in the Flute Orchestra of Madrid. As a great Early Music lover, he played for many years in different ensembles, highlighted among them