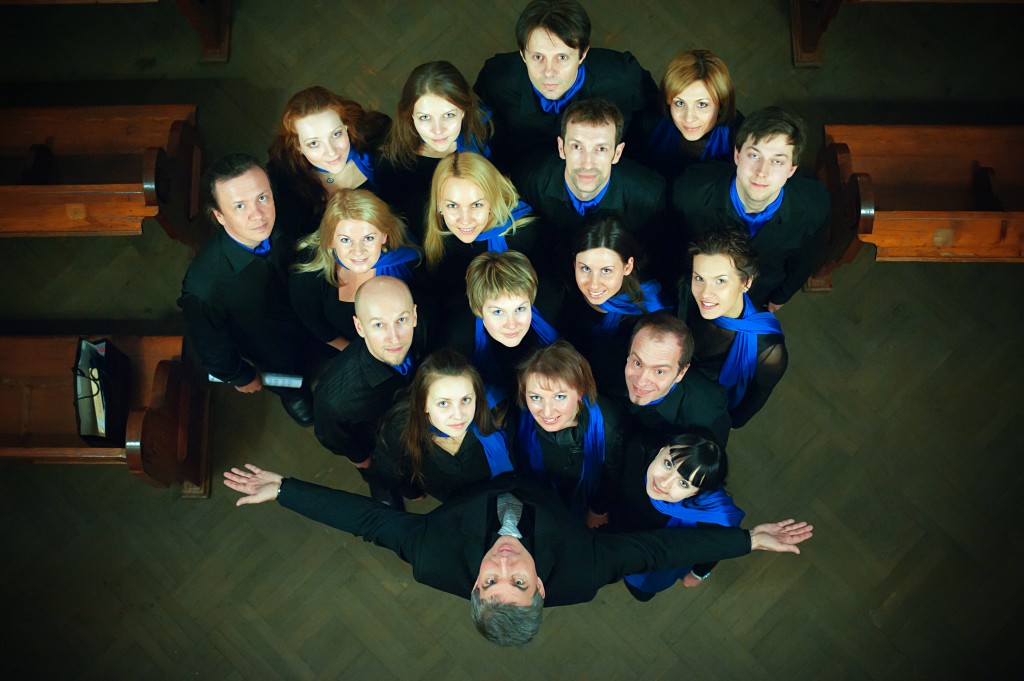 is a group of amateur and singers founded in 2010. It consists of approximately 20 people who have had a vast experience in choral singing. The Choir cultivates a diverse repertoire, and its members become acquainted with a wide range of choral music genres by classical and contemporary composers.

Our conductor Nikolai Kashuro was born in 1965 in Minsk. He graduated from the Belarusian State Conservatory and got his musical education as a choral conductor.
Nikolai Kashuro has been an assistant opera conductor of the Rimski-Korsakov Academy of St.Pertersburg on opera-simphony conducting class held by maestro I.A.Musin.
He used to be the main director of the Belarussian State University, of the State Polytechnical Academy and youth chamber choir Grajna. Having been worked with the choirs mentioned above choirs he became awarded several distinctions in Belarus and abroad: «Prix du Public» Rencontres Chorales Internationales de Montreux (Switzerland), First Prize at the European Youth Choir Festival in Kalundborg (Denmark), First Prize at the National Choir Music Festival « Spadchyna» (Belarus), «Prix Novum Castellum» at the International Choral Festival in Neuchatel (Switzerland), he got a Special Prize at the International Competition of Franz Scubert in Wien (Аustria) and others.

At the moment he's an invitee conductor of POLIFONICA choir, Minsk, Belarus.

Our choir exists on the basis of Writers Association of Belarus which is a strong and important organization in our country which provides different cultural and educational projects and seminars so the choir constantly has a chance to perform at the concerts dedicated to the most prominent writers of Belarus, etc. and has united people of different professions and different levels of musical preparation. The ability and love for music of the choir members are evidenced in their artistry, expressiveness, commitment and versatility.

Due to the individual approach to the work over voice training, harmony of sounding, originality of interpretation, versatility of performance and ingenuousness of expression as well as to high discipline and particular intonation of the word, basing on the best traditions of the art of Russian choir singing, the choir started its active concert live.

Also in the choir we like our folk songs and we are eager to perform them both at our concerts and in our everyday life staying out of the city, in the countryside or just sitting and watching fire somewhere in the forest.
For many centuries, Belarusian songs and folklore have been one of the strongest, most developed forms of national art, playing an important role in the preservation of national traditions and acting as an inspiration to Belarusian professional musicians (composers and performers). To this day the Belarusian people have managed to preserve certain age-old rites and customs: for example, songs for springtime and Easter, ritual songs about rusalki or water-nymphs, songs celebrating birth. Indeed, the sources of belarussian folk art are as inexhaustible today as they were many years ago.
Being a welcome guest in Minsk, the Choir also undertakes international tours. In June 2012, at the personal invitation of President of the mens' choir Belcanto Leo Veldkamp from Apeldoorn (the Netherlands), Polifonica performed at the International choir festival Apeldoorn Zingt with Orthodox church music and a folk program. Its performance won both critical and the public acclaim. And another tour is already scheduled for April 2013.