Lena Rademann is a Baroque violin and viola player and passionated chamber musician. Currently, she studies at the Royal Conservatoire of The Hague with Enrico Gatti and Kati Debretzeni. As an active orchestral player, Lena enjoys covering a great range of styles, from baroque to early romantic music.

She has been a participant of international projects such as Hofmusikakademie der SWR-Festspiele (Midori Seiler), EUBO (Lars Ulrik Mortensen), JSB Ensemble (Hans Christoph Rademann, Jos van Veldhoven) and OFJ baroque (Rinaldo Alessandrini) and she has played in various early music ensembles in Germany, Belgium and The Netherlands, e. g. Margaretha Consort, Bell’Arte Salzburg, Musica Gloria and Michaelis Consort, among others.
As a member of different chamber music groups, Lena had the opportunity to perform in international festivals, for instance Oude Muziek Utrecht (Fringe), Musica Antiqua Brugge (Fringe), ECOS Festival, as well as during the International Young Artist Presentation Antwerp. In ensemble competitions, several of her groups have been awarded with prices, such as Gebrüder Graun Preis (DNMO chamber ensemble) or Sonderpreis des BR Klassik in Deutscher Musikwettbewerb 2019 (AMA Consort). In 2018, her ensemble AMA Consort won the Audience Award of Utrecht Festival Oude Muziek Fringe. 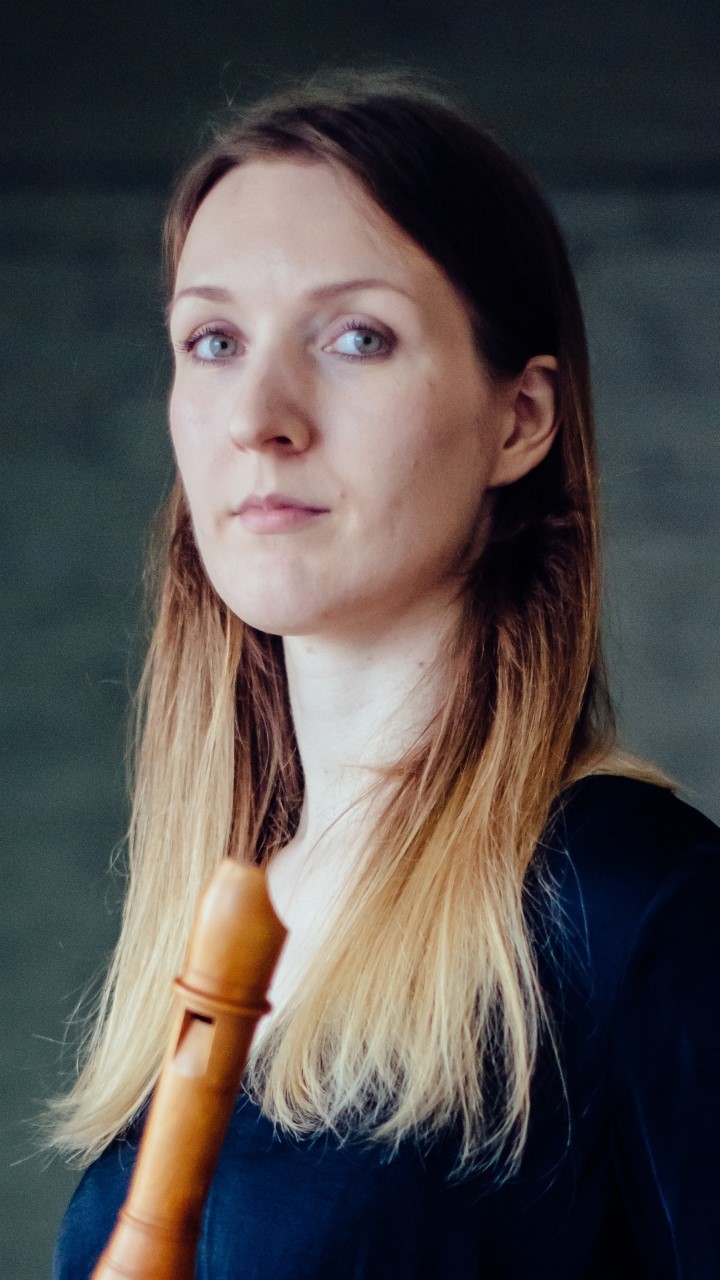 e Bachelor of Music summa cum laude with honours in 2015. After graduation Karlijn discovered the baroque oboe and started private lessons. Having had only 8 months of oboe lessons, Karlijn succesfully auditioned for a premaster year of historical oboe studies with professor Frank de Bruine at the Royal Conservatory in The Hague.
Continuing into a master year 1 historical oboe studies in The Hague, Karlijn started another master studies, recorder, at the Utrechts Conservatory with Heiko ter Schegget, combining in-depth studies of both instruments. Finishing her master year 1 historical oboes studies with a recital marked “very good” in June 2018 in The Hague, she decided to focus on her master studies recorder in Utrecht for the moment where she is graduating in 2019. After graduation she will continue her oboe studies abroad.
Karlijn loves playing chamber music and orchestra works on historical oboes and recorders. Besides the annual passion- and weihnacht concerts, she plays opera, oratorio, and cantata projects in The Netherlands and abroad. Among others she played under the direction of Ton Koopman (Hohe Messe), Fabio Bonizzoni (Bach cantates and ouverture suite), Václav Luks (Dido & Aeneas) and Raphaël Pichon (during Festival d'Aix-en-Provence in 2018 with ensemble Pygmalion).

Amandine Menuge started her cello studies at the age of 4 at the Conservatory of Abbeville (France). After joining the School O rchestra of Meru (Oise, France), she entered the National Conservatory of Rouen (France) in the class of Nathalie Ruget. She has performed in France, Belgium, Ire land, England, Romania, The Neeth erlands , Germany Joy é and Herv é Conser , Pavel Ami and Spain with among others: Elisabeth lcar, Jorge Lopez Escribano, Jaap Schr ö der and Bruno Cocset and in projects under the direction of great musicians as Frederick Haas, Guy Van was, Kenneth Montgomery Niquet. Amandine has studied cello at the early music department of Royal vatory of Brussels (Belgium) with Herv é Douchy. She recently participated in a masterclass of Etienne Mangot and at the XI Curso Internacional de música Antiga MESMAE/ESML in Portugal with Marco Ceccato and Amandine Beyer. Since September 2016, she is studying in the Royal Conservatory of The Hague (The Netherlands) with Lucia Swarts. Amandine is the artistic director of her own ensemble “ Propitia sydera ” created in march 2016. This ensemble is an early music orchestra strings use to tour in France since then.

The American-Korean lutenist, Talitha Cumi Witmer (1992, Tokyo) started her musical studies at age 4 with church choir and piano. When she was 9 she heard a lute on a CD and immediately fell in love with its sound. Her dream to study the lute was then realized at the age of 13, when she began her formal studies on the instrument in Tokyo.

Recent performances as a continuo player have included working with Claron McFadden, Etienne Siebens, Erik van Nevel, Maris Kupcs, and Walter Althammer. In 2017 she performed in the opera, Cendrillon by Jules Massenet together with Residentie Orkest, which in addition to playing the lute, Talitha also worked on editing the harp part for the lute and theorbo. She is a founding member of the ensemble Le Voci delle Grazie, an ensemble that vivifies the music of the Italian court of 16th and 17th century, which is selected in EEEmerging European Ensembles of 2018. She performs in Belgium, Denmark, France, Italy, Japan, Latvia, the Netherlands, and Portugal.

Over the years she took part in master classes by many of today’s leading lutenist, Yasunori Imamura, Nigel North, Paul O’Dette, Rolf Lislevand and Hopkinson Smith. She studied the lute and theorbo under Joachim Held and Mike Fentross at the Royal Conservatory of The Hague, where she obtained her Bachelor's and Master's degree in Early Music performance. She played in numerous ensembles and projects led by established musicians such as Mieneke van der Velden, Daniël Brüggen, Pieter-Jan Belder, Peter Kooij and Charles Toet. Talitha has performed in Festival Classique Den Haag, Modena Grandezze, Meraviglie Festival Musicale Estense, Festival de musique Baroque d'Ambronay, Utrecht Early Music Festival, and in many more festivals.

Alongside performing, she loves to teach children, read books, play the piano and go on day trips.

Mariano Boglioli is a harpsichord player based in The Netherlands. 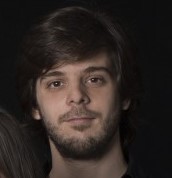 Born in Argentina, he began his musical education studying organ and piano with Marisa Gianni and Norma Scarafa, respectively. He continued at the Universidad Nacional de Rosario (piano and choir conducting), Universidad Nacional de La Plata (choir and orchestra conducting) and Conservatorio Manuel de Falla (harpsichord), being part of the first generation of students at the first early music department in Latin America. His teachers there were Jorge Lavista (harpsichord) and Federico Ciancio (basso continuo). He  moved to the Netherlands in 2012, where he finished his Master studies in harpsichord under the guide of Jacques Ogg and Patrick Ayrton. He participated actively in Master Classes by Luca Guglielmi, Dirk Boerner, Christophe Rousset, Kris Verhelst, Jordi Savall, Menno van Delft and Philippe Pierlot, among others.

During his student years in Argentina he was the harpsichord and organ player of the Coro y Orquesta de la Universidad de Buenos Aires, performing mostly baroque opera and oratorio. He was also part of some chamber groups, and he created the Ensemble Fiori Musicali, which he conducted from the keyboard.

He has been part of renowned ensembles such as La Compañía de las Luces (Buenos Aires), conducted by Marcelo Birman,  specialized in baroque opera, including the recording of two CDs (David et Jonatas by M.A. Charpentier and Hipolyte et Aricie by J.P. Rameau). He performed several times with La Barroca del Suquía, a baroque orchestra conducted by the violinist Manfredo Kraemer, either in orchestral projects as well as in chamber music concerts. He also participated in projects led by Juan Manuel Quintana and Gabriel Garrido. He was invited to perform both as a soloist and as a chamber music player by the International Bach Festival of Gran Canaria (IBF), performing different programs with soloists and members of the Koninklijk Concertgebouworkest (Amsterdam), and members of the IBF Orchestra. He also collaborated with the ensemble Musica Temprana (The Netherlands), Orquesta Sinfónica de Rosario (Argentina), Orquesta Sinfónica de Córdoba (Argentina), Ensemble De Profundis (Uruguay), and many more.

He was hired by the Conservatorio Manuel de Falla from Buenos Aires to work as co-repetitor for the singing lessons of Beatriz Moruja, position he kept until he moved to the Netherlands in 2012. He is regularly invited by the Koninklijk Conservatorium Den Haag to accompany Master Classes and auditions.

He co-founded the ensemble Radio Antiqua (The Netherlands), winners of the first prize in the Göttingen Chamber Music Competition (Germany, 2014) and selected for the Eeemerging program depending on the Festival d´Ambronay (France), being main members of the Academie baroque d´Ambronay (2015), conducted by Enrico Onofri. He was also part of the Ensemble Le Voci delle Grazie, also selected for the abovementioned program. He also co-founded the ens

embles L´Armée des Amoureux and the ensemble La Pantomime, which is a harpsichord duet with Patricia Robaina, which expands for certain programs up to 8-10 members.

He combines his activities as a harpsichord and continuo player, with teaching and choir conducting.