In 1792, Beethoven left Bonn and went to Vienna to study with Haydn. Around this time, he wrote a set of three duos for clarinet and bassoon.
This programme combines one of these duos (here played on violin and viola), with a violin duo by Haydn.

The name 'Estehaagse Ensemble' is a play on ‘Esterhazy’, the palace where Haydn worked, and ‘Haagse’, meaning of Den Haag, the city where the ensemble is based.

It was founded by baroque violinists James Hewitt (graduated a few years ago from the Royal Conservatory of Den Haag with Pavlo Beznoziuk, and now teacher of historical improvisation there), and Xiangji Zeng (currently studying at the Royal Conservatory with Lucy van Dael).  They specialise in chamber music on historical instruments, working together regularly as a duo, but also as a string trio, and as a baroque trio sonata ensemble.

Repertoire ranges from the seventeenth to early nineteenth centuries, and the ensemble plays in venues ranging from churches throughout the Netherlands to private living room concerts.

James Hewitt is active in both early and contemporary music, and becoming well known for his engaging personal style and improvisatory prowess.

He performs throughout Europe, both solo and in ensembles including Contrasto Armonico, Concerto Valiante, the Yiddish Baroque project Simkhat Hanefesh, Pera Ensemble (baroque and Turkish instruments), and the Scroll Ensemble, which specialises in programmes inspired by i 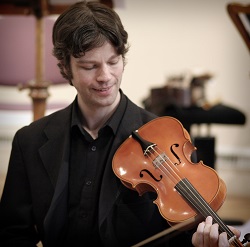 mprovisatory practices of the baroque, and was finalist in York International Early Music Competition 2015. He has participated in several recordings with Contrasto Armonico, associated with an extended project to record all of Handel’s Italian Cantatas, and has broadcast on Dutch Radio 4. He has given improvisation workshops at Yiddish Summer Weimar, and at the conservatoires of Bydgoszcz and Katowice in Poland.

He also works with Brendan Faegre Edge Ensemble (contemporary music ensemble exploring the boundaries between styles and between composition and improvisation), Royal Improviser’s Orchestra, and the DaMu Collective (music/dance improvisation), as well as in theatre projects, such as the Klingon Opera U, in which he plays a newly made instrument, tin dach. On this instrument, similar to a rebab, he also performs modal improvisation and Gregorian chant.

His compositions include works for Cambridge University Opera Society (Moses and Pharaoh), Ely Cathedral Choir, the Nieuw Ensemble, Modello Ensemble, and the Fokker Organ in Amsterdam Muziekgebauw aan’t IJ. He has received performances at the Cheltenham Festival, Nordic Early Keyboard Festival, Royal Institution of Great Britain, and during the Gaudeamus Interpreter’s Competition in Amsterdam. His works will increasingly become available from Parklaan Publications on Tutti Music.

He read music at Girton College, Cambridge, and continued his studies at the Royal Conservatoire, The Hague: baroque violin with Pavlo Beznosiuk, and composition with Martijn Padding, Cornelis de Bondt and Guus Janssen. He completed his masters there with research in improvised counterpoint

Xiangji Zeng was born in Beijing. She finished her bachelor study of law at Beijing Institute of Technology, and then went to Central Conservatory of Music, Beijing, where she studied violin and musicology, completing her master with research in Schubert and his contemporary sonata form.

Inspired by a recording of Bach's Sonatas and Partitas for solo violin, played by Dutch baroque violinist, Lucy van Dael, she moved to the Netherlands to study baroque violin with Lucy and Ryo Terakado at The Royal Conservatory, Den Haag. In addition to solo repertoire,she plays in many European early music ensembles, such as Barokensemble Eik en Linde and Concerto Valiante. She takes part in the 'Side by Side' performances in which students perform alongside members of the Orchestra of the 18th Century.  She co-founded Estehaagse Ensemble, specialised in baroque and classical chamber music on historical instruments, and also works with Shanghai Camerata, the first early music ensemble in China, and ensemble Boxwood & Bows, dedicated to the lesser-known Classical trio repertoire for clarinet and strings. 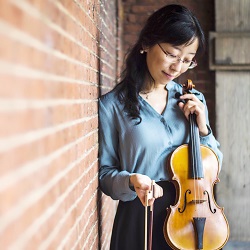 She received 3rd Prize and Young Audience Award with ensemble IJ Space at the International Van Wassenaer Competition (Utrecht) in 2018. In the same year, the CD recording in which she participated with the first Chinese counter tenor, 'Meli Li', was released by Pacific Audio & Video Co. She played in many early music festivals, such as Utrecht Early Music Fringe (2018, 2017) and Boston Early Music Festival (2016, with Ton Koopman, subsequently touring to New York, Den Haag, Leiden and Deventer). Collaborating with English violone player Margaret Urquhart, she played early baroque chamber music at the 'Zhong Yin' Double Bass Festival in Beijing (2016). She is also active as a teacher, giving summer courses in Beijing.