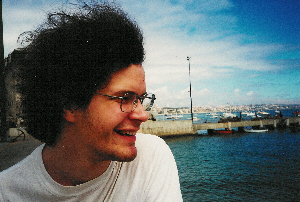 is active as a performer on harpsichord, piano, fortepiano and organ, and as a composer. As a performer, he is specialized both in historical performance practice and in contemporary music - especially contemporary music on the harpsichord - and has played at many contemporary and early music festivals in different European countries and the USA.
Born 1972 in Oulu, Finland, he began his musical studies in his home town at an early age, and continued them at the Sibelius Academy in Helsinki. He finished his studies in the Netherlands, where he lives since 1997, and has obtained degrees in organ and harpsichord playing, historical pianos, early music and contemporary music from the conservatories of Amsterdam, Utrecht and The Hague. His teachers have included Jacques van Oortmerssen, Bart van Oort, Jacques Ogg, Siebe Henstra, Annelie de Man and Miklós Spányi, and at masterclasses Jean Boyer, Hans-Ola Ericsson, Lars Ulrik Mortensen, Andrea Marcon, Zsigmond Szathmáry, Malcolm Bilson, Stanley Hoogland and others.
Besides solo performances, Lievonen plays regularly in many chamber music groups, including the baroque ensembles ALGO and ‘Beauty and the Beasts', the contemporary music ensembles Hexnut and Scala, and a fortepiano trio with Anna Ryu (violin) and Agnieszka Oszańca (cello). He is a founding member of Ensemble Ambrosius, a Finnish ensemble that plays contemporary music on baroque instruments, and has recorded music of Frank Zappa on two CDs. Lievonen has also played keyboard instruments in various professional orchestras, such as the Helsinki Philharmonic, Finnish Radio Symphony Orchestra and Sinfonia Lahti. He is skilled on some more unusual keyboard instruments as well - like playing contemporary music on the Hammond organ. Lievonen has even played the theremin - he played the theremin part in the world première live performances of Dmitri Shostakovich' film music ‘Odna' in Paris and Amsterdam in 2003. Since 2009 he is the organist of the unique microtonal (31 tones/octave) 'Fokker' organ in Amsterdam.
Ere Lievonen's compositions have been performed at the Young Nordic Music festivals in Reykjavík (2002) and Helsinki (2005), at the Nordic Music Days in Copenhagen (2004), as well as at other concerts and festivals in several European countries, Australia and Thailand. His composition teachers have included Olli Kortekangas and, in Amsterdam, Rafael Reina, with whom he also studied the theory of Carnatic (South Indian classical) music. Influences of Carnatic music, as well as other non-Western musics, can indeed be heard in several of his compositions. Another area of special interest for him is microtonal music. He is a member of the Society of Finnish Composers.
Ere Lievonen also studied orchestral conducting with Atso Almila and Jorma Panula at the Sibelius Academy in Helsinki. From 2005 to 2007 he conducted the UCSA Orchestra, an orchestra consisting of students at the University College Utrecht.

graduated in Piano at Rovigo's Conservatory in 1998 with maximum marks. Then she studied chamber music at Siena's Accademia Chigiana and Imola's International Piano Academy with Pier Narciso Masi. She obtained her Master's degree in Piano at Livorno's Conservatory, where she studied with Daniel Rivera. Distinguished in several musical competitions in Italy both as a chamber musician, and as a soloist, she is an active chamber musician in various formations, at the modern piano and at the fortepiano as well, in which instrument she specialized with Bart van Oort at the Royal Conservatoire in The Hague, finishing with the highest marks. She has performed, among others, for Ravenna's "Giovani in musica" festival and Utrecht's "Oude Muziek" fringe festival, and in Florence's Accademia Bartolomeo Cristofori, Bologna's Villa Aldrovandi-Mazzacorati, Teatro Manzoni, The Hague's Korzo Theatre and Dr. Anton Philipszaal. In 2002 she graduated in Conservation of Cultural Heritage (Musical Specialisation) at the Bologna's Athenaeum.