Shuhei Takezawa from Japan ,he specializes in historical performance of violoncello, viola da gamba and Baritone, and his repertoire ranges from early baroque to contemporary. Shuhei graduated at the Tokyo University of Arts where he studied cello with Keishi Miki,Tomoya Kikuchi, Nobuko Yamazaki and viola da gamba with Hiroshi Fukuzawa. Between 2006 and 2013 he was a member of the New Japan Philharmonic.Until 2016 he was a member of the Bach Collegium Japan,Orchestra Libera Classica. Now he is member of The Royal Consort of Japan. Alongside his performer duties, Shuhei also teached at the Toho Gakuen College and is also completing his early music master studies at the Royal Conservatory of the Hague, studying at the classes of Lucia Swarts, Jaap ter Linden, Mieneke van der Velden and Philippe Pierlot. 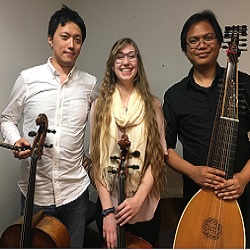 Punto Bawono (1986) is currently studying theorbo, lute, and baroque guitar with Mike Fentross and Joachim Held at the Royal Conservatoire of The Hague. Punto has played in masterclasses for many renowned musicians, including Hopkinson Smith, Peter Croton, Michael Chance, Emma Kirkby and David Miller. He also received coaching in the field of historical performance practice and chamber music by specialists such as Jed Wentz, Ryo Terakado, Frank de Bruine, Lucia Swarts, Wilbert Hazelzet and Susan Williams. Punto performs regularly as soloist, accompanist and a continuo player. Punto is playing on a theorbo built by luthier Jan van Cappelle, which is a copy of an instrument by Sebastian Schelle from 1728 (coll. Germanisches Nationalmuseum, Nuremberg).

Sydney ZumMallen is a baroque cellist currently pursuing her graduate degree with Lucia Swarts at the Royal Conservatory of The Hague. She has performed with the Fantasmi baroque ensemble under the direction of Paul Leenhouts across Peru, Puerto Rico, Germany, and Austria. Sydney has attended early music festivals including Tafelmusik Baroque Summer Institute, International Baroque Institute at Longy, American Bach Soloists Academy, and has performed at the Boston Early Music Festival. Sydney holds a bachelor’s degree in cello performance with Eugene Osadchy at the University of North Texas.