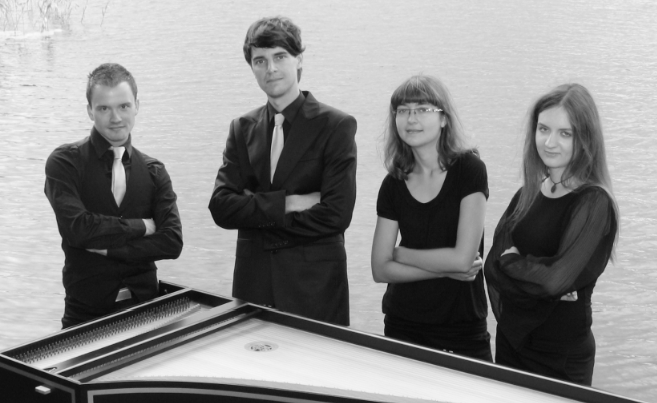 Agnieszka Papierska (1988) - baroque violin. After finishing her Bachelor's degree in Academy of Music in Lodz (Poland) she decided to specialize in historical performance practice. This led her to Koninklijk Conservatorium in Den Haag where she continues her studies in the class of Enrico Gatti. She has been working with many professional modern and early music orchestras in Poland and in The Netherlands. She also performs as a soloist and with chamber music repertoire. To the most important projects may be included leading the performance of Julio Cesare by J. Haendel in Łódz Opera. She attended to many master courses both in modern violin and historical performance practice.

Marek Szymański (1984) - baroque cello, graduated his master studies in Ignacy Jan Paderewski Academy of Music in Poznan. At the moment he is a student of Lucia Swarts's baroque cello class at Royal Conservatoire in The Hague. He played many concerts as a soloist and in orchestras in Poland and abroad (Austria, Norway, Russia, France and Germany). He took part in Second World Performance of recently discovered Mozart's - Schikaneder's opera ‘Der Stein der Weisen' together with Poznan Festival Orchestra conducted by Maestro Marcin Sompolinski in Salzburg. Moreover, he works with „Alma" piano trio. They were awarded the Special Prize on the First International Nikolay Rubinstein Chamber Music Competition (Moscow, 2007). He participated in many radio and TV recordings as well as film music recordings.

Maciej Wierzchołowski (1985) - organist and harpsichordist. As a pianist reached the final of 7th Polish Young Instrumentalists Contest (2002). In 2005 as a student of Cracow Academy of Music he got a second prize in International Organ Competition in Rumia (Poland). Interests in keyboard music ranging from the baroque to the early romantic period brought him to the magnificent early music department of the Royal Conservatory of The Hague. There he studied harpsichord with Jacques Ogg and now his following the master studies in organ with Jos van der Kooy. Since 2006 he is responsible for conception and management of „Chamber Music Festival" in Olsztyn, his home town. As a soloist and chamber music performer he has been giving concerts on music festivals in Europe, inter alia, Bach Days (Cracow), Forum Musicum (Warsaw), Academie de Sable (Prague), Sachsische Orgelakademie (Dresden), Summer Organ Concert series in the Westerkerk (Amsterdam), Oude Muziek Festival (Utrecht). As a soloist cooperates with Toon Kunst Koor Amsterdam. In May 2012 he is participated prestigious 2012 John Hill HSBC Organ Recital Series in London.